U. Beier illustrated this vigorous, melodious style in Odù [Ìbàdàn] 7 (1957) p. 41 plus 4 plates. Similar music from Àli̩‑Ísìmíè̩n, Ágbò̩ is posted below on this page.

Ìgue̩ is the annual collective sacrifice to the head of the Ó̩ba of the È̩dó ("Benin" or "Bìní") Kingdom. The excerpted chant is described by Bradbury ("Divine kingship in Benin", Nigeria Magazine 62, 1959, p. 202) as follows:

Here we have a classical rite of divine kingship. The divine power of the Ó̩ba is renewed and strengthened by a medicine made from a variety of the most important products of the earth. With the Ó̩ba's well‑being is identified the well‑being of the nation and by this rite and the sacrifices that follow, the welfare of the Ó̩ba and his people is ensured for another year.

The sacrifices on this occasion are directed, not to any disembodied spirit or deity, but to the Head of the Living Ó̩ba, to the seat of his senses, his judgement and his good fortune. He is first rubbed with white 'chalk', the symbol of prosperity and ritual purity, then annointed with the blood of the sacrifices by the Ìhó.gbè priests who intone prayers in archaic ritual language:

"May your head be strong. May your ears hear good news. May your heart beat steadily. May the bones of your arms be powerful, etc."

Two days after Ìgue̩ proper, the Ó̩ba — wearing èmóbo regalia and tapping silently on an ivory gong — dances to an éwìnní drum, escorted by Chief Ìsekhurhe̩ with the ùkhurhe̩ ancestral staff. The dance proceeds slowly to the palace gate and just beyond it, as the people repeatedly chant Áà yó, áà yó è̩bo̩! 'Don't go forth/depart to the divine plane of existence!' Thus the Ó̩ba is urged not to join his deified ancestors at this moment, but instead to remain in his palace to celebrate yet another Ìgue̩ in the coming year. When the Ó̩ba does indeed turn back to reenter the palace, the people shout Ìyáarè! 'Go forth [and] return [safely]!' — the generic greeting for a roundtrip shamanic journey from àgbo̩n the visible world to è̩rínmwìn the invisible spirit realm, and back. 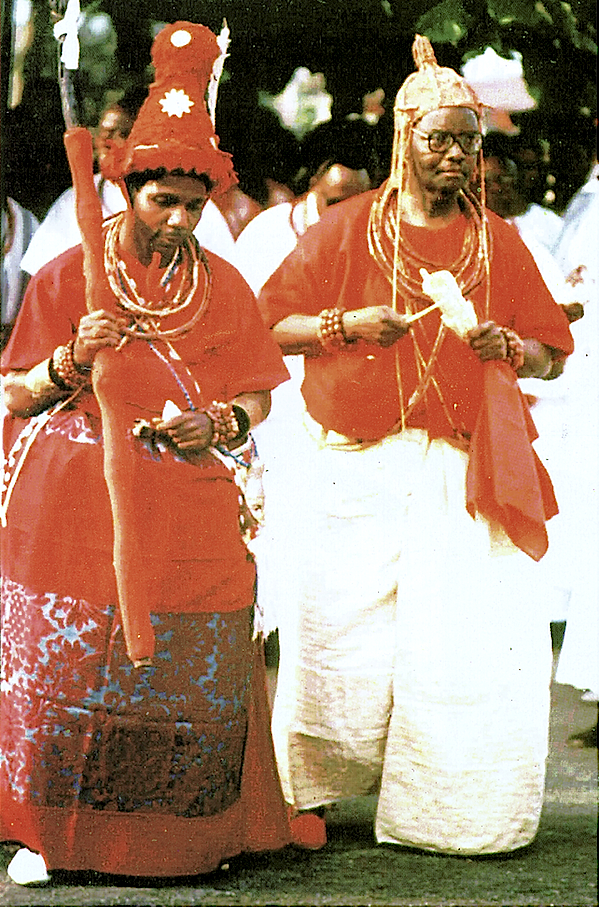 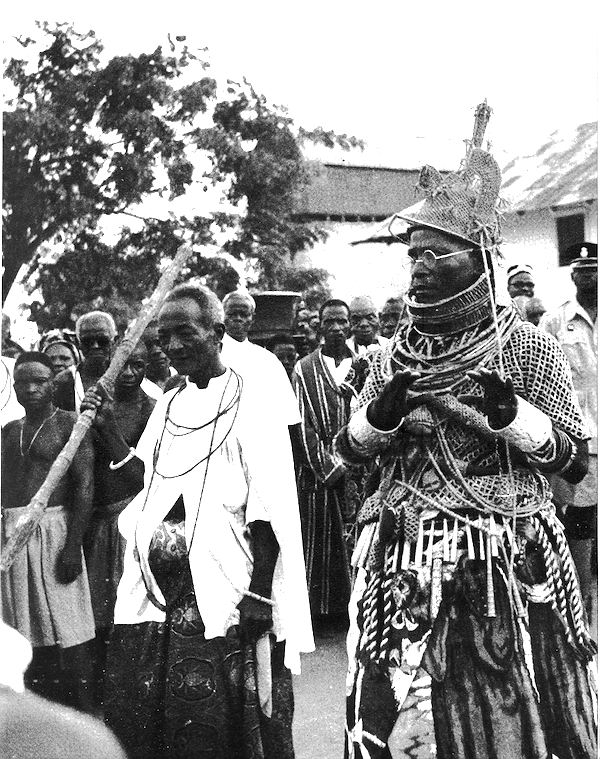 This widespread myth explains a ritual prescribed by the díbì̩a to the postpartum mother and which is then obligatorily repeated by the child in the mother's presence at the start of adolescent initiation  — in both cases arguably to avert the child's death before the 'debt' of procreation has been repaid to the ancestors. Such reproductive failure defines the ò̩gbá‑ǹje complex of reincarnation belief (cf. Manfredi (1997) and references therein; the same text is also transcribed on pp. 343‑48 of my dissertation). The preventive ritual in both instances applies the sympathetic magic of stomping to bits an old bathing gourd corresponding to the physical appearance of the ò̩gbá‑ǹje beings encountered in the farm by the childless woman of the myth, and also for good measure matching the narrative context in which the ò̩gba‑ǹje child's taboo was fatally broken by being called a mere gourd and forced to prepare its own bathing water.

Immediately before performing this text, the same speaker had opened the recording session with Àkó̩ nà míní 'Intelligence in water' (runtime 1:34) which can be heard here. 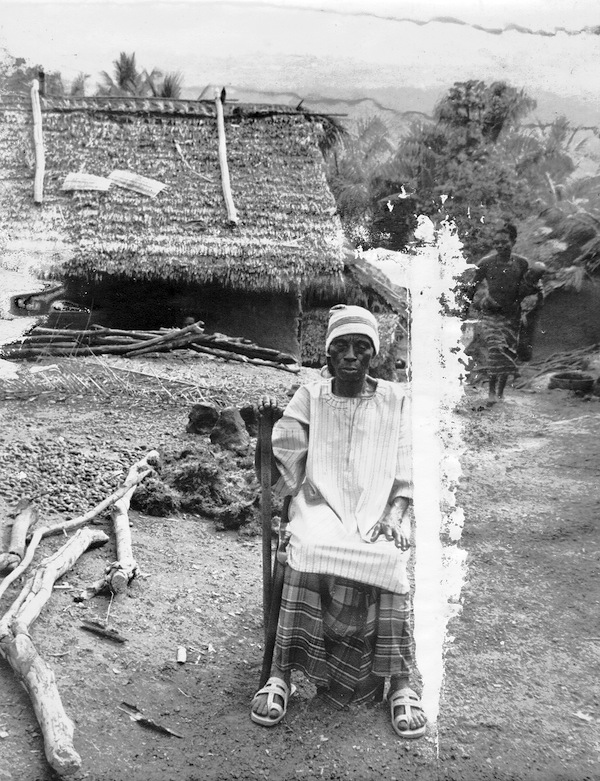 Recorded August 1977 in company of "Ígwé" B. Àku̩ńné (Ò̩di̩nani̩ Museum, Àgbádaàna Nri) at the request of Prof. M. Ó̩nwu̩ejìó̩gwù̩ (University of Benin, Benin City) and roughly transcribed/translated as the appendix of this manuscript. 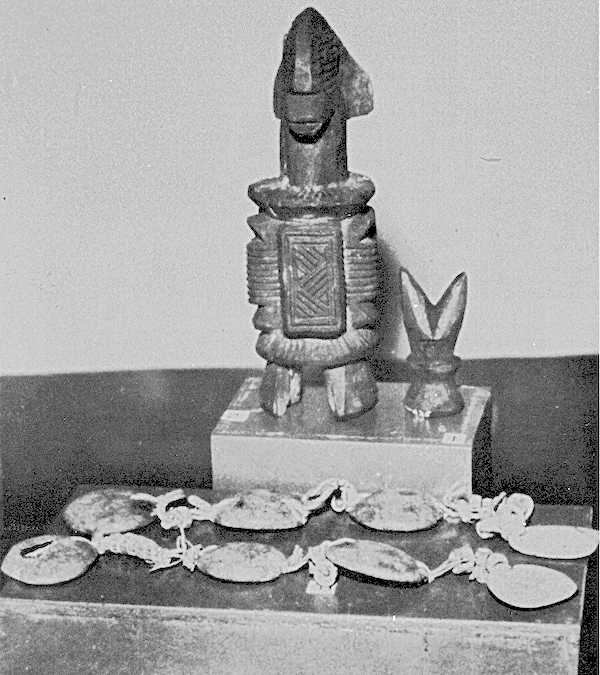 No image of díbì̩a Chúkwumà is available. Above is a sculpture representing Ágwù̩, the "ambivalent supernatural force [sc. álu̩si̩] associated with medicine, divination and magic" (Ó̩nwu̩ejìó̩gwù̩ 1981, 36, cf. 1997, 13) as displayed in Ò̩di̩nani̩ Museum, Ǹri. Grouped with Ágwù̩ is a representation of Ágwù̩'s own ìkéǹga (an icon of the right arm's instrumentality) together with an 8-bit oracle processor, comprising twin strings of 4 half-seeds of the òkwe tree (Ricinodendron africanum, cf. Williamson 1972, 373f., Ígwè 1999, 601).

Williamson, K. [1972]. Ìgbo-English Dictionary, based on the Ò̩ni̩cha ["Onitsha"] dialect. Ethiope, Benin-City. The manuscript of the 1984, 2nd edition (lost by the publisher) has been recovered posthumously and posted online.

Edited composite of recordings made in mid‑1977 led by È̩bú Èdió̩n, an ògbú‑èbulu 'ram‑killer' (herbalist chief) of Àli ̩‑Írèn, Àli̩‑Ísìmíè̩n, Ágbò̩. The performance reconstructs excerpts of the initiation play (égu ò̩mu̩mu̩) originally composed by È̩bú for the coming‑out of his age‑grade circa 1920 — hence his situational appellation of ónye ezè égú ('maestro di cappella'). For the microphone this time around, È̩bú convened a reunion in front of his house. The loud and joyous show attracted a boisterous crowd, audible in the background. No costume or choreography was attempted, all focus being on the counterpoint of bells and chorus with È̩bú's lead vocals and his strenuous obbligatos on è̩kpi ̩ri ̩ — the transverse trumpet carved from an antelope horn, visible in his right hand below. È̩bú's prose introduction to this music, recounting the journey of "Òkórò" (runtime 2:24), transcribed as exx. (5) ‑ (10) on pp. 43f. of my dissertation, can be heard here. 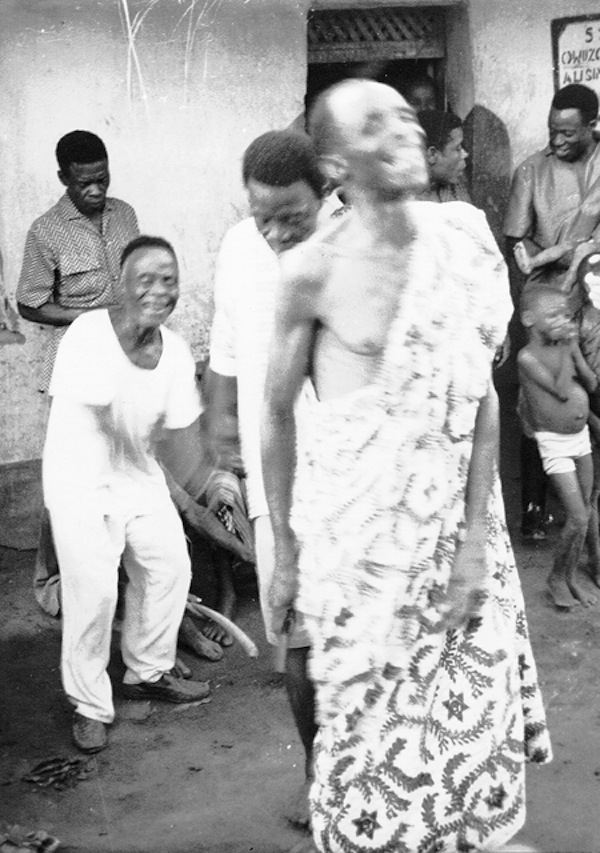 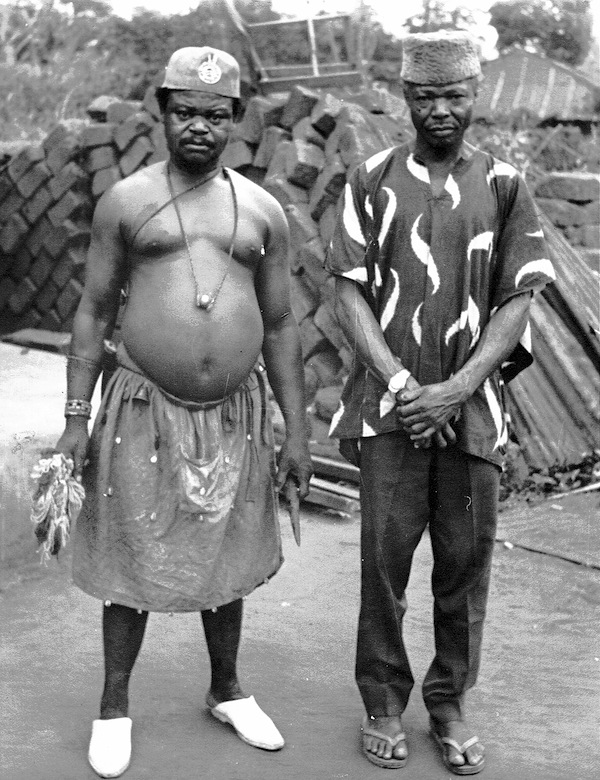 1. This indigenous firewater was called "illicit gin" and "unrecorded alcohol" by the colonial regime, because its production dented British gin profits and tax revenues after 1929, cf. S. Heap, The Liquor Trade & the Nigerian Economy, 1880‑1939 (dissertation, Ìbàdàn University, 2005) summarized in " 'Those that are cooking the gins' ; the business of ògógóró in Nigeria during the 1930s" (Contemporary Drug Problems 35 [2008], 573‑609). For this reason still today, kái̩n‑kai̩n noticeably shares some of the antiauthoritarian élan of the 1929‑30 intifāda against "Lugardism" (A. Áfiìgbo, The Warrant Chiefs; indirect rule in southeastern Nigeria, 1891‑1929, Longman, London 1972, pp. 207‑48) in which state efforts to control palm produce and peasant labor‑time were riotously resisted, and many colonial quislings (the infamous "warrant chiefs") lynched or otherwise deposed. By extension, even humble (spontaneously fermemted) palmwine eventually tapped into the anticolonial lustre and countercultural frisson of its moonshine derivative, as evoked in the poetic output of the Palmwine Drinkerds Club. 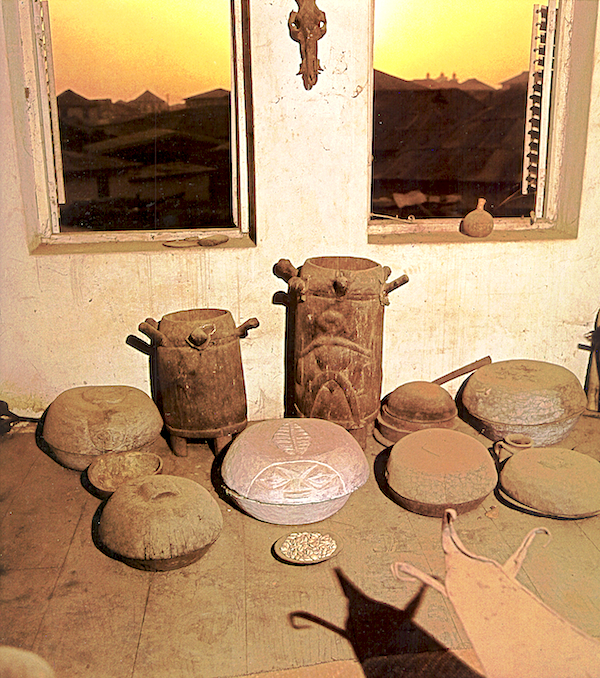 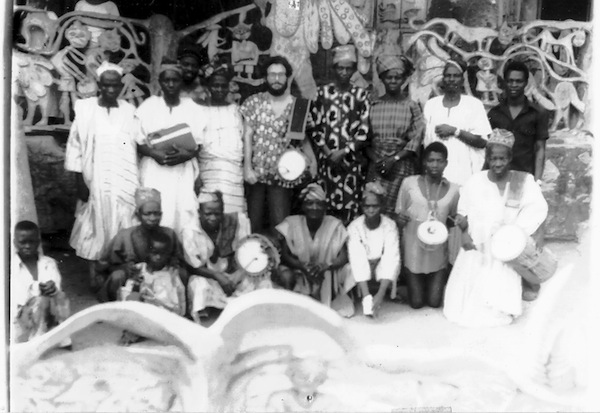 the location of this page is http://manfredi.mayfirst.org/OtherLongplayingFieldRecordings.html
last updated 21 September 2016